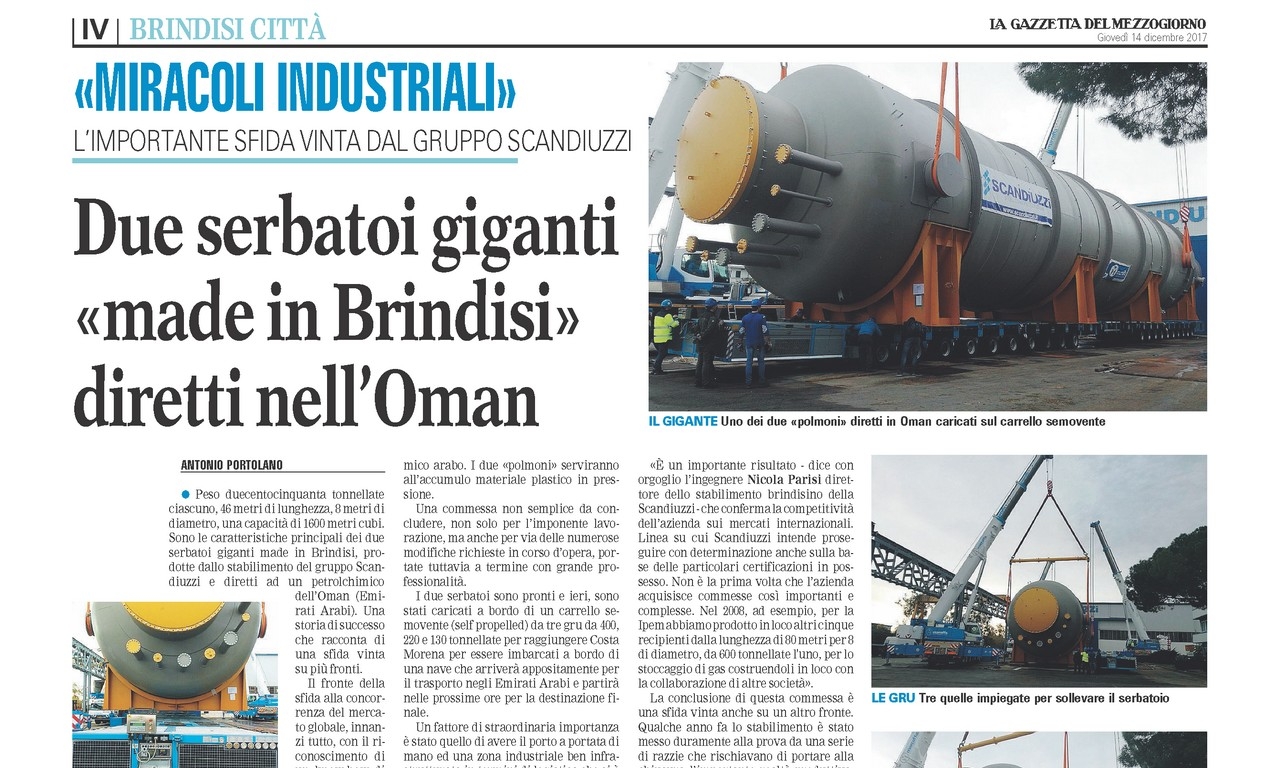 Two maxi purge bins “made in Brindisi” headed in Oman

The weight of Two hundred-fifty Ton each, Length 46 meters, diameter 8 meters, the capacity of 1600 m³. They are the principal characteristics of the two purge bins made in Brindisi, manufactured by the workshop of Scandiuzzi group and headed to a petrochemical plant in Oman (United Arab Emirates). One success history which tells one challenge won on various fronts. First of all, the front of the challenge to the global markets competition, with the recognition of a high level of know-how and also proved by Asme-U stamp certification (acronym of American Society of Mechanical Engineers) which the company obtained for the production in the field of the large pressure equipment. One certification which permits to Scandiuzzi last year to take a job for the construction of two “purge bins” headed for an Arab petrochemical plant. The two “lung” will use for the storage of plastic materials in pressure.


An order not easy to conclude, not only for the majestic manufacturing, but also for the many changes required during the work, however completed with great professionalism. The two tanks are ready and yesterday, they were loaded on board of self-propelled by three cranes of 400,220 and 130 Ton to reach Costa Morena to be boarded on a ship which will arrive only for transport in the United Arab Emirates and it will depart in the next hours for the final destination.
A factor of extraordinary importance was the closely port and an industrial area well-formed in logistical terms which was strategic forasmuch the two “giant” will not have to travel long distance that will weigh on the production costs. A success story which arrive after one year of hard work, on at least two fronts: technological one with the recognition of a very high quality job order to a Brindisi company and the one of victory over the several difficulties encountered over the year on a square that is not at all simple as that of Brindisi.

It is an important result – said with proud the Engineer Nicola Parisi director of Scandiuzzi’s workshop in Brindisi – which confirms the company’s competitiveness on the international markets. This line on which Scandiuzzi intends to continue with determination considering also the certifications in its possession.This is not the first time that the company acquires such relevant and complex orders. “In 2008, for example, for Ipem, we have manufactured on site five more tanks with a length of 80 meters and 8 of diameter, 600 Ton each, for gas storage manufacturing on site with the collaboration of other companies”.
The conclusion of this order is a won challenge also on another front. A few years ago, the workshop was put to a hard test by a series of raids that risked to bring the important productive reality to the closure. “That is true. And in this respect the tenacity of the property, which in spite of the theft suffered, has continued to believe and invest in this territory. Every day we struggle with a difficult reality, a harsh territory. I myself have left Ansaldo from Genoa to come here but I do not regret this choice and I believe in Brindisi, in the potential of its industrial area. The wishes and the hope are that the city will continue to grow and emerge from this harsh crisis".