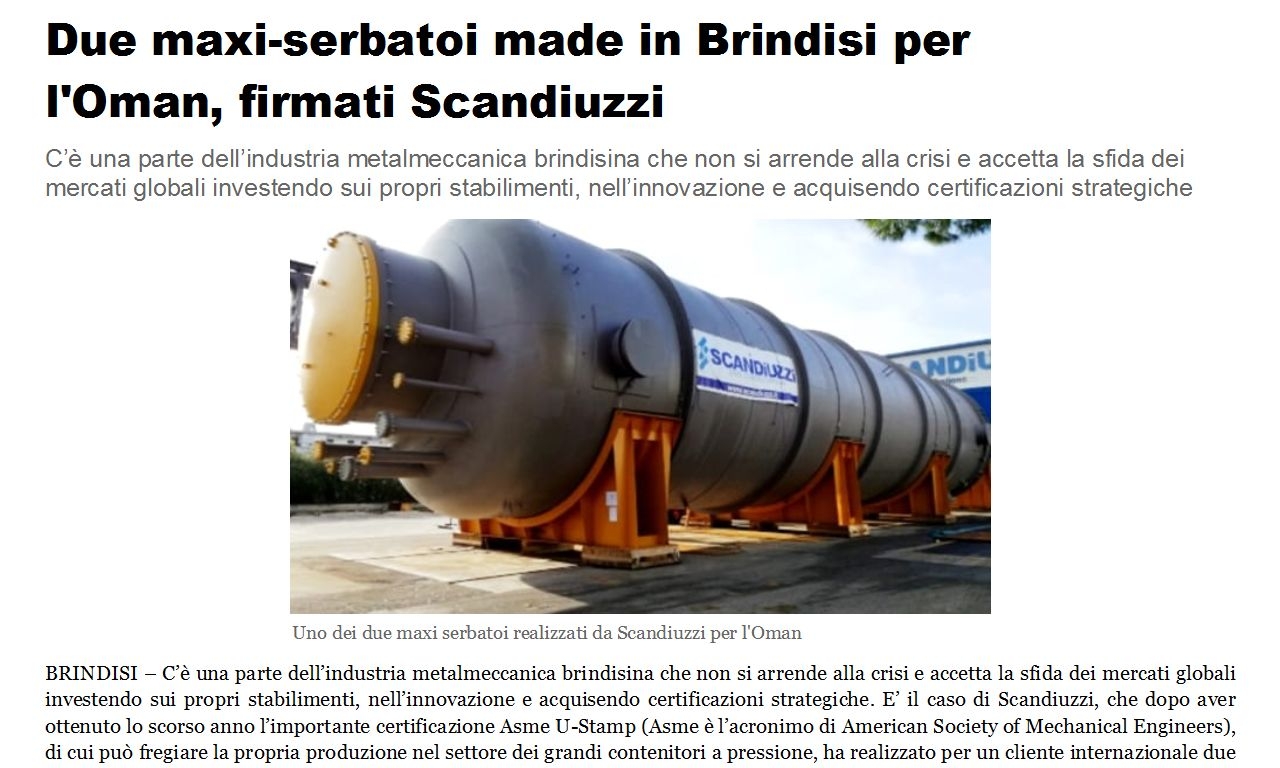 BRINDISI – There is a part of Brindisi steelworking industry which do not give up hope of crisis and accept the challenge of the global markets by investing in its workshops, innovation and obtaining strategic certifications. It is the Scandiuzzi’s case, who last year after obtained the important Asme-U certificates (Asme is the acronym of American Society of Mechanical Engineers), of which can adorn his production on the large pressure parts equipment, he has realized two purge bins for an international client headed for a petrochemical plant in Oman.


The two tanks assigned to contain plastics products are 46 m long with a diameter of 8m, and 1600m³ of capacity. After one year of work, also for design change required in-progress work, but starting from the first days of the next week the tanks will depart by boat to reach their final destination in the United Arab Emirates. The engineer Nicola Parisi, director of Scandiuzzi’s workshop in Brindisi, is properly proud of the results, which it was possible to reach treading his way through a competitive market where it is impossible to compete without Asme certificates.


And it is the same Parisi who explains that is the strategic location to turn in Brindisi’s favor, in a production area benefited from favorable logistic transports. Scandiuzzi would continue on this way and focus his attention on foreign jobs. Besides, to build the two tanks he had to invest in the extension of the workshop’s layout in Viale Enrico Fermi, this stimulate to proceed along this path, that of the challenge of growth in production quality which should eventually pay off the initial cost, if like this we can say, of the workshop’s risk in the international competition to enter in the supply-channel that count.


Now in the workshop, they are work on the delicate operation of transport until the quay ‘s boarding area, but it is not necessary to cover long distance: the yard is very close. Another concrete demonstration of the importance for the local development is on the one hand to facilitate the business involved in these strategies, on the other hand, to defend and affirm more and more the role of Brindisi’s port.


Read online the article of BRINDISIREPORT